I should be waking up my kids and getting them ready for daycare, but I want to enjoy a few more minutes of peace and quiet before the whining begins. We haven't gotten up this early all summer, but today is a special day...AMSTI Summer Institute begins today! This is my fourth year as a trainer and my fifth year to participate. It's almost like the excitement I feel on the first day of school! I will have another group of teachers this year, and I know that I will enjoy them as much as I have all my other groups! I am planning to talk to them about blogging, wikis, and other 21st Century tools later in the week. I am hoping to get them to participate in my wiki. It's going to be a fun two weeks, and I am ready to begin!

The job posting for technology coach went up Friday. The official title is "Technology Integration Specialist." They are only hiring one this year and maybe adding another one (or two) later. I thought about waiting until later to apply (this job is so much bigger than one person), but I decided to go for it this year. The job description was rather interesting. It is going to be re-posted Monday, but I was able to grab a copy of the original. I was surprised to see that I was expected to be familiar with the Nova Scotia Public Schools Program curricula, the Information Economy Initiative, and the Vision For the Integration of Information Technologies document. I will research these on the Internet, but I wouldn't be surprised to see them disappear from the job description and see them replaced with documents related to the Alabama Course of Study!

Quiet time is over...time to rouse the children! It's going to be a wonderful day!

It's Time to Open Our Eyes!

I read an article in TechLearning that speaks to the heart of the problem of integrating technology into the classroom. Eyes Closed Tight is written by Gordon Freeman, and I really like what he has to say. Here are a few snippets with my thoughts mixed in.

A decade ago, education leaders raced to get computers into schools. Macs squared off with PCs. Cisco faced off against Novell. The Internet came to life. Why is it, then, that educators who wouldn't dream of buying their airline tickets or banking anyplace but online have not been able to transform education with technology? What happened?

I graduated from college in 1989 with a minor in computer science. I learned how to write computer programs in BASIC, FORTRAN, COBOL, and PASCAL. I couldn't write a computer program today to save my life! We worked on terminals that were connected to a mainframe computer that was huge. It had its own special room that I was never allowed to enter. There was one printer in the lab, and I remember waiting my turn for my programs to print. I spent hours there, but what I learned did not transform my teaching.

My first teaching job was in a middle school in Northwest Georgia. There were computers in the building, but technology was not a major part of my classroom. I did have the privilege of serving on the committee that decided how the money we were going to receive from the first payout of the Georgia Lottery would be spent. The money was earmarked for technology, and we had to create a five-year plan. I don't remember the dollar amounts that were in our budget, but it seemed enormous at the time! I had to learn about these crazy new things called CD-ROMS, and servers, and towers. It didn't sound like anything I had learned about four years earlier in college! They were even telling me that you could link all the computers in the building together on some kind of network. I thought it was amazing!

As life would have it, I never enjoyed the fruits of my labor on that committee because my husband was transferred that spring to Alabama. I then spent a few years in a small private school that had computers...12 in my classroom! It was a wonderful learning opportunity. I had ten different kinds of computers, and I had great visual aids for teaching computer history because I almost had a complete set of all of the old "mini-computers" pictured in a textbook from my college computer science minor! My teaching was not transformed, but I learned a great deal. 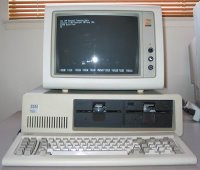 Eventually I was hired by Decatur City Schools, and I was excited to learn that there was a computer lab across the hall from my classroom especially for the math classes to use! I was eager to take advantage of this great resource. To my surprise, hardly anyone was using it! I found out that there was no software for math on the computers. One teacher took her students in there to work with spreadsheets, but that was about it. I started looking around for software and decided that The Geometer's Sketchpad was worth a try. I wrote and received a mini-grant for the software, and my teaching was transformed!

Maybe educators should take a hint from their students, who are inquisitive and not afraid to take risks.

My students and I learned together how to use the software. At first I was afraid of making mistakes in front of them, but I pushed those fears aside and kept on going. Through a series of very fortunate events I was given the opportunity to attend a week-long Summer Institute on The Geometer's Sketchpad that was truly a career-altering experience. I gained much-needed confidence in my teaching philosophy and skills, and I came back ready to immerse myself and my students in hands-on learning.

Typically the technology and instructional departments do not sit down at the same table and ask, how can we work together to improve school performance with technology or help students learn? And too often, administrators don't encourage either group to explore innovative solutions.

There were some logistical issues I had to work around. I did not receive any help or encouragement from my system's IT department. No one prevented me from doing what I needed to do, but I felt as if I were floundering on my own. It seems to me that the IT department focused their attention on maintaining the hardware, and there was no one to help the teachers actually use it.

If a school's IT department isn't working alongside those who develop curriculum, maybe it's time to establish a position that serves as a bridge between the two. The person in this role (called an "assistant superintendent" or "principal" for performance and accountability) works to ensure the development of joint strategies for higher student performance and better-trained teachers.

This is what I want to do. I don't want to be an assistant superintendent or principal. I want to be a technolgy coach. I want to help teachers look at their teaching objectives and see where technology could be integrated with their existing curriculum, and then I want to help them figure out how to get it done! Integrate (as defined by Dictionary.com) means to to make into a whole by bringing all parts together. Technology is not an end in itself; it is a part of the picture. It is a tool for engaging, clarifying, exploring, and sharing the ideas that students are learning.

I have been told that the technology coach position will be posted "in the near future." I'm not sure what that means. Is it next week, next month, next year, or just sometime this decade? I almost wish it were next year so I could spend a year trying out my new Interwrite School Pad and Personal Response System. I'm sure I could find a way to use them as technology coach. I don't want to miss this opportunity because it may not come around again!